I finally got into the city yesterday to see the Van Dyck exhibition, Van Dyck: The Anatomy of Portraiture at the Frick. The exhibition, which focuses on his portraits is the most comprehensive one ever organized. It's arranged chronologically into important periods: Antwerp (first and second), England, and Italy, and provides an unparalleled documentation of the artist's development as a portrait painter. It's an absolute must see.

Although it was extremely crowded, Sunday being "Pay What You Wish Day" (from 11:00 A.M. to 1:00 P.M.), as well as the last day of the Tri-State area's Easter/Spring break, it was not difficult to see and enjoy the paintings. The show starts downstairs in two small galleries hung with drawings and oil studies for paintings and engravings. Never one to follow the crowd, I made a bee line for the upstairs galleries on the main floor, where twenty-four magnificent portraits of kings and queens, clergy, colleagues and beauties of the day were on view. I wanted to see the paintings before I got too tired fighting the crowds and standing for hours on end. I was immediately treated to some of the best paintings Van Dyck did in his short, illustrious career. There were six familiar gems from the Frick's own collection - the pair of paintings, "Frans Snyders" and his wife "Margareta de Vos", the resplendent "A Genoese Noblewoman", the large family portrait of "James Stanley (7th Earl of Derby) with His Wife & Daughter", "Lady Anne Carey" and "John Suckling", as well as his best-known self portrait from the Metropolitan Museum of Art (above right). 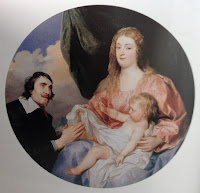 There are no religious or mythological paintings here except for the painting, "The Abbe Scaglia Adoring the Virgin and Child" (left). Scaglia was an important patron of Van Dyck's and this commissioned piece is a fine example of how Van Dyck's talents could be put to good use. The catalogue notes the sitter for the Virgin bears a striking resemblance to Marie-Claire de Croz (she does), the subject of another painting in the exhibit. The catalogue further states, "Unfortunately, no documentation has yet explained a connection between the Duchess and Scaglia". As my husband suggested, it may just be that Van Dyck, having recently finished her portrait and needing a face for the Virgin, used hers. Interesting theory, right? The dates certainly bear that out: 1634 and 1635. Sometimes, it's just not that complicated.
The most rewarding moments however, came from seeing three paintings - two of which I had never seen before in person, and one I had probably seen in my travels in Europe many years ago but don't remember.

The first painting is the large portrait of "Marie-Claire de Croz with her son, Philippe-Eugene", (the woman mentioned above) (not shown). The expressions of the sitters are so realistic they look as if they could step right off the canvas. The gesture of the small child is very endearing as he reaches for some trinket or toy that is obviously used to get and keep his attention, while his mother, proud and supremely confident, lovingly fingers the brim of his hat. But for their opulent silk and brocade costumes, this could be a contemporary portrait. No painter today, however, comes close to this kind of mastery. 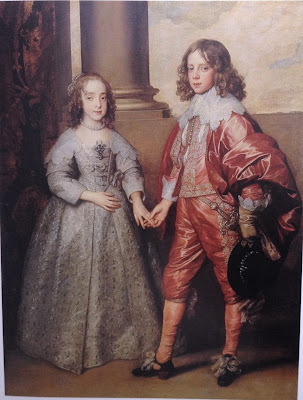 The second painting is "Prince William II of Orange, and Mary, Princess Royal" (right), which is the wedding portrait commissioned by Prince William's parents. It was done in 1641, the year of Van Dyck's death at age forty-two. One can only imagine what he might have accomplished had he lived another twenty-five years or so. I think it's one of his finest portraits. Everything - the composition, the deft painting of the fabrics, lace and jewels, the background - contributes to the spell it casts over the viewer. Curiously, the expressions of the two children are almost devoid of emotion. It's as if Van Dyck is deliberately trying to keep his own feelings about the bizarre spectacle of a 9-year-old bride and her 15-year-old bridegroom in check. And yet, there seems to be just a glimmer of pride in their faces... or is it bemusement? Their expressions are as enigmatic as the Mona Lisa's. This painting comes from the Rijksmuseum in Amsterdam, one of the many museums I visited in my youth. However, I don't remember it, or it just didn't impress me at the time. That's a subject for another day - how one's views of a painting can change over time.
And lastly, there is the portrait of Van Dyck's beguiling mistress, Margaret Lemon (not shown). Delicately and sensitively painted, it clearly shows how much she meant to the artist. It's no coincidence that it hangs next to the portrait of Van Dyck's wife, "Mary, Lady Van Dyck, nee Ruthven". They invite comparison and speculation about their respective relationships with Van Dyck. Their expressions say it all. His wife has a cold, haughty look, while Margaret's gaze is warm and inviting, with a dose of mischievousness thrown in. The painting had been lost and was only recently recognized as Van Dyck's original. The catalogue states, "In this portrait, long considered lost, Lemon appears in three-quarter profile, delicately touching the fabric at her shoulder. Only recently has this version been recognized as Van Dyck’s original, the source of many imitations. At some point, the canvas was cut down, truncating the gesture of Lemon’s left hand. Private Collection, New York". I just love stories like this. I suppose the signature may have been cut off too, which explains why it went unidentified for so long. Imagine the privilege of having that on your wall! It reminds me of the unbelievable story of the lost Third Imperial Faberge Easter Egg recently discovered by Wartski, a London jewelry firm. But that's a post for another day... 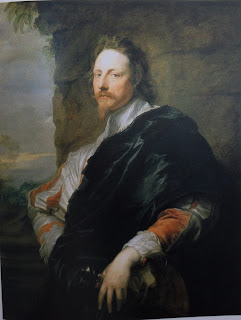 Finally, the drawings are marvelous study guides for the paintings. Van Dyck's preliminary sketches show how the finished paintings evolved from those first impressions put down with charcoal and chalk. Van Dyck regarded these simply as guides rather than preparatory drawings to be copied exactly, and often used them to study the folds of the drapery or the pose, rather than the features of the sitter, which he did right on the canvas. For example, the "Portrait Study of Nicholas Lanier" (above left) shows how the artist originally posed his subject, with a higher three quarter head set and the right hand visible in a typically languid pose. The painting (right), untypically, looks a bit labored. The sitter looks tired of having to sit so long, and if you examine it closely, you can see the pentimento (evidence of repainting) above his right shoulder which is awkward and anatomically impossible - a rare misstep for the Maestro. It's the only drawing in which the pose is more successful than in the finished painting. 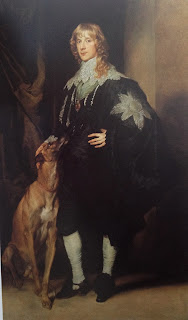 Overall, there are about one hundred works in the exhibit, spanning his entire career as a portraitist. I felt only a slight pang of disappointment when I saw the brilliant drawing "Two Studies of a Greyhound" (right)and realized I wouldn't be able to compare it to the finished portrait, "James Stuart, Duke of Richmond & Lenox" (left) which is not in the exhibition. Luckily, it's just a few blocks away at the Metropolitan Museum of Art. I recommend you go and see that too, because there's an exhibition of another of my all-time favorite artists - Madame Elisabeth Louise Vigee-Lebrun through May 15th.
If you can't get to the Frick before the show closes on June 5, make sure you visit their website. It's one of the very best websites ever created: beautifully designed, informative and easy to navigate. It has a complete checklist where you can see every work in the exhibit, as well as the commentary. Visit it at: http://www.frick.org/exhibitions/van_dyck
CMC
P.S. Click on the images in the blog to enlarge them.
P.S.S The sculpture, "The Dead Thrush" is still at the Frick, so make sure you visit the Portico if you go. I had mistakenly written in my first post that it's no longer there. There's also an incredible selection of Sevres Porcelain on display from the Frick's own collection.
P.S.S.S. If you see any glaring mistakes in these posts, please let me know. Did anybody notice I was spelling Van Dyck incorrectly? (Corrected now)

Posted by thefoxsbrush at 5:09 PM