Last year, while in the middle of a nasty disagreement with a friend about modern art, in particular Lucian Freud's horse paintings, I came across an article written by one of Britain's most well-known and controversial art critics, Brian Sewell. I was looking for that infamous speech Sir Alfred J. Munnings gave in 1949 at the Royal Academy's awards dinner. It was his final speech as president of the R.A., and not being one to care much about what anyone thought of him, A.J. proceeded to rail against the likes of Henry Moore, Picasso and the "affected juggling" and "shilly-shallying ...in this so-called modern art". The article didn't provide me with the speech, but it did give me an introduction to one of the clearest minds in the art world. I became an instant fan of Mr. Sewell. He wrote for the London Evening Standard for 30-odd years, lambasting the most prominent figures in English contemporary art. He was kinder to more traditional artists - he thought Munnings was an honest, competent painter, who didn't deserve the bad rap he got from his final, fatal act of defiance. Here is the link to that article: http://www.standard.co.uk/goingout/exhibitions/sir-alfred-munnings-an-artists-life-richard-green-w1-8319257.html
After reading many of his columns online, I bought "Naked Emperors", one of several books he's written about the movers and shakers of the British contemporary art scene: Damien Hirst, Lucian Freud, Nicholas Serota, Charles Saatchi, et al. He points out that selling art nowadays has very little to do with talent and a lot to do with wealthy gallery owners promoting artists they invest in. I'm not quite sure how I got on this subject. I recently saw an article in the New York Times about an art installation coming to Rockefeller Center titled, "Van Gogh's Ear". 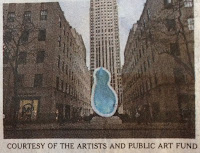 It's an empty swimming pool turned on its side and plunked down in the middle of the plaza. The "brainchild" (that's sarcasm) of Michael Elmgreen and Ingar Dragset, a duo from Berlin (it took two people to think this up?), it was snapped up by the Public Art Fund's director, Nicholas Baumer. It's a silly joke, not art. In The NY Times article the writer, Robin Pogrebin, seems hard-pressed to come up with a description that doesn't sound completely ridiculous. Mr. Baume, however is confident in his ability to see it for what it really is. "It is a... surrealist object in the shadow of this extraordinary iconic building that represents so much of the U.S. industry and architecture".  Mr. Sewell is turning over in his grave. It saddens me to think the voice of one of the staunchest critics of the contemporary art scene has gone silent forever. Especially when I read about something like this.
Let's return to the subject of Lucian Freud's horse paintings. I haven't the faintest idea what he was trying to do when he painted them. A close-up profile view of the back end of a brown and white horse is titled, "Skewbald Mare". (At least he got the lingo down. I almost fell out of my chair when Julian Fellowes, the estimable creator of Downton Abbey and a stickler for veracity has Lady Mary say, "Just give me a hand up!" when she comes off her hunter in the first episode of Season Six. The correct term is a "leg up" for all you of the non-horsey persuasion.) The painting looks like it's been cut in half - a King Solomon solution to two collectors fighting over the same prize. It's badly composed and just plain uninteresting. As if to emphasize its importance, there's a photo of the Duchess of Devonshire standing next to it in his studio. She looks a bit bewildered. "Tell me again, Lucian, why exactly am I standing here?" My friend rallied to Freud's defense, claiming they were painted from life. Very commendable! All artists should work from life as often as possible. It doesn't mean every effort an artist makes is noteworthy or exhibition material. Don't all artists throw away their unsuccessful works, or paint over half finished canvases? Freud's portraits of dogs lying next to grotesque naked homo sapiens are more successful as paintings, but they're extremely unpleasant to look at just the same. Give me Anthony Van Dyck any day. And a "Brian Sewell is Fab!" coffee mug.
CMC
Posted by thefoxsbrush at 8:34 PM