Out In The Field - An Improvement

Last week I posted my first effort at painting outdoors in a long time. I included a photo of the pastel sketch and a photo of the field of forsythias I was painting. When I compared my pastel to the photo, I immediately saw some major problems with the sketch. I decided I would work directly over the original pastel instead of doing another painting for the purpose of learning from my mistakes, as well as teaching pastel artists how to rescue their painting when it goes wrong.
First, let me say that no matter how much you love a painting you're working on or parts of it, if it's wrong, you must correct it. It's an absolute rule. There are no exceptions. I once did a really lovely painting of a huntsmen walking his hounds. His face was particularly well painted. After examining it more closely I realized that his head was just a little too big for his body. I put off repainting it for days but finally decided it just had to be done. I thought if I could paint it that well once, I could paint it that well again. That attitude gave me the confidence to repaint it without loosing any of the detail or sensitivity of my first attempt. If I had clung to the idea that I'd ruin it if I repainted it, it probably wouldn't have turned out as well as it did.
Anyway, I certainly didn't love this pastel. I knew it needed help. It seemed unsalvageable.
If you get stuck while working on a painting and don't know how to fix it, don't do anything at all. I like to sit and just look at the painting. It could take hours, it could take days before I see something I feel needs to be changed. Then I can't wait to start painting again. It never fails. I used to be rather timid about painting over something the second day. I work very quickly and would often get the essence of the thing down in a matter of a few hours. When I'd return to the easel the next day, I'd be afraid to touch it for fear of ruining what I had already put on the canvas. I learned to be patient and let the painting speak to me. Try it if you have this same problem. You'll be happily surprised. 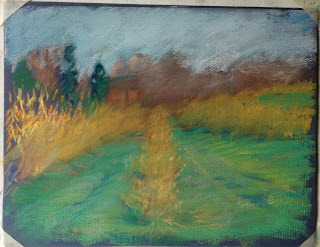 Back to the pastel. After looking at the pastel and comparing it to the photo, it didn't look quite as bad as I had originally thought. I took one of my old bristle brushes and softly brushed off as much of the pastel as I could without gouging the paper or ruining the surface (right). You can still see a lot of the residue, but the surface is now clean enough to apply more pastel. I used a dark blue Canson pastel paper. I prefer dark paper to light paper, because the colors always look too dark to me on light paper. Conduct a simple test to see what I mean. Take three pieces of pastel paper - a dark paper, a medium colored paper and a light colored paper. Next, pick three pastels - a light , a medium and a dark color. Make a few strokes on each piece of paper with each color, then compare them. See how the color of the paper drastically changes the way the colors look on the different papers (below left and right). This is why choosing the paper color when beginning a pastel painting is important. Look at the subject and decide whether you want to bring up the lights on a dark paper, or paint in the darks on a light paper.
BTW, an excellent book on color mixing is Ian Sidaway's Color Mixing Bible. It illustrates hundreds of color mixing combinations in various media - oil, pastel, watercolor, etc. - which I find to be much more instructive than a color wheel.
For this demonstration, I chose three pastels, with a light, medium and dark "value" (left), from the red color family to simplify the results. Next I chose three different papers - a light, medium and 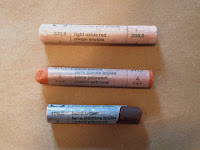 dark value, to show how each background value affects the way the pastel looks. Notice how even the lightest pastel makes a mark that is darker than the paper on the light paper (below left).
On the middle value paper (below right), the light pastel looks light, while the middle pastel almost blends into the paper. Squint down and it will almost disappear. Finally, the dark blue paper shows the light and medium pastels as light, while the dark value is very close to the value of the paper. Notice too how it looks much redder than in the other two examples. I assure you, it's the same pastel in all three photos. The paper color affects the value as well as the color or "chroma" of the pastel. Do some experiments yourself, with various papers and pastels and see what happens. 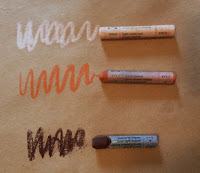 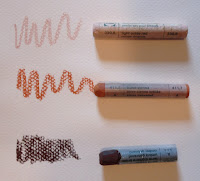 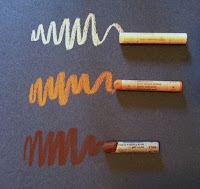 If you rework pastels too much by erasing or other techniques, the tooth of the paper will get destroyed and it won't take any more pastel. I occasionally use a kneaded eraser to lift the pastel after I've brushed off what I can, but again, you have to be careful you don't destroy the paper's surface. I didn't have any workable fixative on hand, which I would normally spray on the surface before applying new pastel. Workable fixative helps the pastel to adhere to the area that has to be repainted. It too can be over-applied, so use it sparingly.
Once I had the surface cleaned, I looked at the photo again to see what corrections needed to be made. My horizon line was too low, (not too high as I stated in my earlier post) and the shrubs went straight back to the middle of the paper - a rather dull and not very interesting composition. I originally wanted to capture the effect of all those delicate branches with their tiny yellow flowers in those large swaths of yellow. In my attempt to paint that lovely effect, I didn't pay enough attention to the composition.
In the repainting, I left the sky pretty much the way I had it. I like the dark blue of the paper showing through the light cerulean blue. Although I didn't make too many changes to the painting, the few that I did make made an enormous difference. I made some sweeping diagonal lines to indicate the rows of bushes on the left. I lightened the grass on both sides, with lighter lines to indicate the ruts in the grass. I softened the center line of bushes by breaking it up a bit so that it wasn't completely straight, as you can see in the photo. Next I turned my attention to the red house in the distance. It was too big and drawn rather poorly, so I made it smaller and less bright, so it wouldn't come forward as much. It already draws the eye back to it because of its color. It's a spot of red in a sea of yellow and green.
The final touch was putting in some of those delicate branches and flowers with a few quick strokes of a light yellow. The pastel sketch is now closer to what I was trying do in the first place and is more interesting as a composition. By redoing the original, I learned I wasn't that far off, but those small changes made a big difference.
CMC


Posted by thefoxsbrush at 9:15 AM