What a Difference a Day (or two) Makes!

I went to the sales Monday night, and went again last night, and the complete transformation of the Fasig-Tipton sales grounds could not have been more dramatic if it was computer-generated on a giant iMax screen.
Where there was tranquility and quiet, there's now a blaring, indecipherable stream of babbling over a loudspeaker that penetrates every inch of the cigar smoke-filled air. It sounds like somebody's imitating a Jew's Harp with their lips and fingers. Except the voice is saying 500, 500-0-0-0-0-0, 525, 525, 550, now it's 550, 550, 600. Thousand. Dollars. The noise is inescapable. I get a call on my cell phone, and even with the speaker on, the volume turned up all the way, my ear to the phone and my finger in my other ear, I can't hear a word of what the caller is saying. I hang up and text - "text me".
I can't help but wonder what these pampered, coddled equine babies think of all this. The inescapable noise, the smells, the sights. It must be a bit unsettling for them, to say the least. Oddly enough, most of them are taking it in stride. I'm more bothered by this than they seem to be.
People are everywhere. They're clustered near the TVs, along the new wooden rails of the walking ring, in small and large groups - everywhere. It's hard not to literally run into someone every few steps. The yearlings are being shuttled back and forth from their stalls, paraded around the walking ring for 10 minutes, led down the chute to the sales ring, sold, led up the chute, back through the walking ring and back to their stalls. For the yearlings, it's all over in just 20 short minutes. Although it's all very organized and controlled, it feels chaotic. Or maybe the word is electric.
I'm supposed to meet some friends for a quick drink at Table 78, but I have no idea where that is. I ask a waitress. She indicates it's all the way down at the other end of the patio. It's hot and I know I won't survive trying to make my way through the overcrowded dining area, so I go back outside and walk along the row of stalls facing the restaurant. As I near the other end of the patio, I see on the TV that the yearling in the ring has passed the million dollar mark, so I stop to watch what happens. I check the sales catalogue - she's a filly by Medaglio D'Oro out of Whisper To Me. She gets all the way up to $1.425 million, so I wait to see her come out, because she's the highest priced yearling of the sale, colt or filly. Perhaps the buyers are dreaming of another Songbird. I take a photo with my phone, but the light is very low and all the shots are blurred. 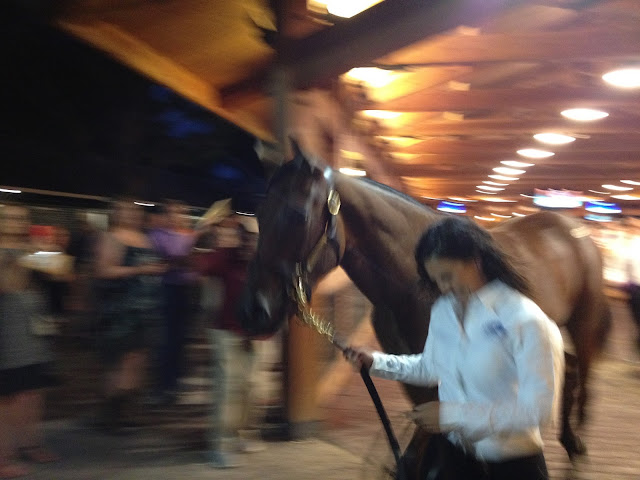 I wish I just watched her go by instead of trying to get a photo. I've come to realize, I trust my eye more than the camera. It's funny, because one of my recurring dreams is photographing things or events - horses, hounds, people. I've often said that I don't really see things when I'm photographing them. I get so involved in taking the picture, I don't see the action or details until I'm editing the film. When I went to the Whitney on Saturday, I deliberately left my camera in the car. I wanted to experience the race without thinking about getting a good photo to use for a painting. It was great not lugging a camera around for a change. First of all, a camera with a big zoom lens is not exactly a fashion accessory. It's all metal and pretty heavy. And bulky. It always feels like an albatross around my neck. I watched Frosted in the paddock, and for a split second he turns his head and looks up. The light strikes him just the right way. His eye flashes in the late afternoon sun. I feel a pang of regret for an instant. But I have a mental picture. As Frosted leaves the paddock, I walk quickly to the grandstand and head up the track towards the top of the stretch. The horses are still warming up and I make a mental note of who's lathered up, who's a cool cucumber. People with cameras flank me on both sides, and someone else asks if they can squeeze in to get a picture. I'm not the least bit sorry I don't have a camera (I could always use my iPhone in a pinch).
At the top of the stretch, as Frosted rounds the final turn and heads for the wire, I can see his jockey, Joel Rosario with a tight hold on him. It looks to me like he's trying to slow him down. The fractions were so fast the other horses are cooked, and Frosted still has plenty of run left. I've never seen anything like this in all my years of watching horse races. And I've seen three Triple Crown winners before American Pharoah.
But back to the sales.
I finally find my friend, Christina, my new best friend and we talk for what seems to be only a short while. The sales are still going on, but I haven't been paying attention. It's been a long day and it's finally catching up to me, so I say goodnight. A yearling passes me on the way to the ring, Hip 252. I look in my catalogue because it seems like a high number. The last horse. I can't believe sixty-one yearlings have been sold since the sales-topping filly. I need to get some sleep. When I get home, I don't even remember hitting the pillow.
Oh yeah. The Frankel colt I wrote about earlier brought half a million bucks. Not too shabby!
Posted by thefoxsbrush at 12:53 PM