I think I've finally recovered from my trip to Virginia, although putting the clocks ahead one hour during my trip didn't help. I always feel like I have jet lag for weeks after Daylight Savings. It doesn't matter if they're set an hour ahead or behind. My body just doesn't seem to be able to adjust. I've tried to acclimate to it by waking up earlier (or later) as it approaches, but it doesn't help. The least they can do is turn the clocks ahead on a Friday afternoon so everybody gets out of work an hour early and turn them back on a Monday morning so we get to sleep in an extra hour. Then perhaps, at least  psychologically, it would make it more palatable!

The reason I went to Virginia in March instead of June or July was to photograph several of the hunts in and around Middleburg before the close of the season. I'm gathering reference photos for an upcoming exhibition f paintings, "The Virginia Hunts." It's an invitational show of Signature Members of the American Academy of Equine Art (AAEA), and I'm very excited and honored to have been asked to participate. Hunting season was just ending and formal hunting doesn't start up again until next fall, so I wanted to get some material to work on through the summer. The exhibition is slated to open in May 2018, at the Museum of Hounds and Hunting in Morven Park in Leesburg, VA. It will coincide with the 2018 Virginia Hound Show which is held on the last Sunday in May.


I was on the road for eleven days. I left my house on Friday, March 10th and didn't return until Monday, March 20th. I headed out in a snowstorm, which proved to be a mere nuisance compared to the giant snowstorm that hit a large swath of the Mid-Atlantic and Northeast areas a few days later. My trip included the Middleburg, Piedmont, Orange County, Keswick and Farmington hunts. My original schedule included Warrenton and Deep Run as well, but that was sabotaged by the bad weather. Of course, one can never be sure what the weather will be like in mid-March, so I was a bit unlucky in that respect.
﻿

I'm still editing my photos, changing exposures, color, contrast and so on from my trip. I'm not a very good photographer; I take photos mostly out of necessity, since I can't paint from memory or my imagination like the sporting artists of the past. I set my digital camera on Automatic Program and hope it knows what to do. I feel guilty sometimes, thinking I should know more about what I'm doing with a camera, but never guilty enough to actually do something about it. Life is too short.
I made Warrenton my hub, as it was central to the state as well as five or six of the hunts I had on my itinerary My first stop was Middleburg on Saturday, March 11th. I wanted to see Hugh Robards' last day as huntsman with the Middelburg. Hugh has spent most of his life as an MFH in Ireland and the States, and the last three as huntsman for Middleburg. I won't pretend I know much about him. I met him while illustrating a book he wrote in 2006 titled, "Foxhunting, How to Watch and Listen," and I attended several hunts and puppy shows during his tenure as MFH of the Rolling Rock. I know enough about him to realize this was an event I didn't want to miss. (For an excellent article on Hugh Robards please see this week's issue of Norman Fine's excellent online magazine: www.foxhuntinglife.com.)﻿﻿﻿﻿﻿﻿﻿


I drove to the kennels early on Saturday morning to make sure I caught the hunt staff before they drove to the meet since I had no idea where it was. I'm not one to meticulously plan ahead; come to think of it, I'm not one who even does the most rudimentary preparations. Somehow, it's never been a problem. I usually figure out where I'm going and how to get there, and this was no exception. When I got to Middelburg, I just typed in "Middleburg Hunt" on Google Maps on my iPhone and Voila! A few minutes later I was pulling into the driveway of the kennels. While driving around those roads however, I realized it might be a problem if one doesn't know which meet it is or its location. I can see how one might spend the entire day driving around the back roads of Middleburg looking for a field full of trailers. Except in Virginia they have a quaint practice of putting out a sign at the entrance of the farm or field with the name of the hunt and a pointing arrow: Middleburg Hunt ⇨, Piedmont Hunt ⇨, etc. I thought it was a nice little touch, but I think it has more to do with the plethora of hunts in the area - one can hunt every day of the week and never follow the same pack of hounds twice! They also start at a much more reasonable hour at this time of year - 10:00 A.M. No crack of dawn drive in the dark, thank heavens!

The day was cold and windy, but the sun was bright and making a valiant effort. I found Hugh in his tack room, smoking a cigar and looking thoroughly relaxed and happy. Julie, his wife and first whip, and Libby ﻿﻿Gilbert were there getting ready as well. As Hugh helped Julie with her coat and boots, I couldn't help feeling quite privileged sitting there talking about his plans after he retires. We talked for about twenty minutes and then they had to leave for the meet. Hounds and horses were already in the trailers, saddles and tack already packed. I followed behind the two trailers. The meet was just a few miles away, so we arrived well before ten o'clock.
﻿﻿﻿﻿﻿﻿
﻿

﻿﻿﻿﻿A large field was already gathering at Patty Mulligan's farm on Mountville Road as we pulled in. One of the first people I met was Liz Callar, a talented and prolific photographer who lives in Virginia. I was familiar with her work, but hadn't met her before. She's the American version of Jim Meads - always in the right place at the right time! Super nice, super helpful and a hard worker. We exchanged greetings and cards. I'll be writing more about her. We became friends and she was an invaluable help to me in the coming week.
﻿﻿﻿﻿﻿﻿
I looked around the field to see if I recognized anyone on horseback. I spied Jt.-MFH Jeff Blue in a large Ram truck. He told me he'd be following by car that day. His passengers included Susan Wight of the Plains and his broken-coated terrier, "Goggles." I recognized Dick McQuade, an acquaintance from steeplechase days, who was now whipping-in for Middleburg. Tyrrell Sharp, Hugh's former field master at Rolling Rock had come down for the occasion as well. There were many prominent people in the field that day but those were the only people I recognized. There were two  sidesaddle riders in the field, who cut very elegant figures in their dark blue habits and top hats. I think this one (below) will make an excellent subject for a painting. 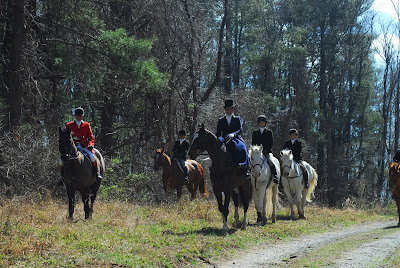 They moved off promptly at ten o'clock and Hugh put hounds into a covert straightaway. The sun was behind the trees, lighting the veteran huntsman in soft rim lighting. (See below) It's my favorite type of lighting, because it features the subject, dark and in shadow, softly outlined against a dark background. It's reminiscent of a pastel I did over thirty years ago titled "To The Next Covert." I can see an oil painting of this for the upcoming AAEA exhibition. I'd add more hounds and more color to the trees.

There were plenty of off-road places at this particular meet where we could follow in a car to watch the hunt. A man named Gus offered me a seat in his truck since I didn't have AWD in my car. He knew the country very well and we kept ending up in all the right places before anyone else. At one point hounds were on a line somewhere on the grounds of Foxcroft, and as we excitedly waited for the fox to emerge straight ahead of us, a car drove by and turned him and the hounds went silent. They eventually found again and crossed Mountville Road, but we never saw the field until they came in at the end of the day. Hugh had picked up the hounds at Foxcroft and drove them back to the kennels. I'm sorry I wasn't there for that. I imagine it was bittersweet for him to call them home one last time. 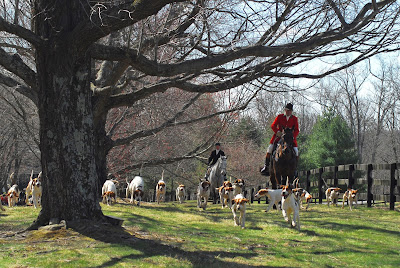 A delicious hunt "breakfast" followed in the open field at Mulligan's farm, with fine spirits and good food, including mulled cider, hot chocolate and soup cooking over a fire pit, courtesy of the Patty and another young lady whose name I don't know. My apologies! It was an excellent end to the day and the season.
And now April 1st has passed, which is the date some hunt staff begin or end their service. Hopefully Hugh will now have time to write his memoirs. -CMC
﻿﻿

Posted by thefoxsbrush at 9:31 AM