I recently checked out some artists' websites who paint animals, and I was dismayed to see how often they use white straight out of the tube. It seems to me too many painters out there are using white without mixing it with other colors. The white pigment is applied without any thought to shadows or form.

Here's a reality check. Look at the painting of hounds (below). Although there appears to be a wide range of colors and values, including white and black, there is no pure white in it. I never use white straight out of the tube, even in the areas that are the lightest, i.e., the white areas in direct sunlight. My white is always mixed with blue, yellow, red or a combination of all three. I never use black. Straight out of the tube or even mixed with other colors, it has no place on my palette. One of my workshop students once asked me, "What have you got against black?" Well, I just don't see the color black when I look at nature. I mix Ultramarine Blue and Burnt Umber for the deepest blacks, so that I can control the "temperature" of it, but that's a post for another day. 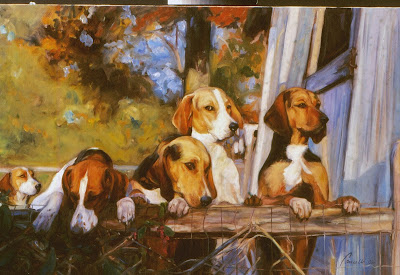 Hounds get very dirty when they're out hunting, caked in dirt and mud, and anybody who's ever owned a white horse knows that they never stay white, not even when they've had a bath and been put in their stalls with a sheet to keep them clean for a show! So why do I see such glaring white stars, stripes, snips, blazes, spots and socks? I think the reason is pretty simple. What the mind "knows" and the eye "sees" are two different things. Until an artist can separate one from the other, he/she will continue to paint whites that are too light and too clean. The mind dictates that the area is white, even though the eye sees the light and shadow on the white form. It's too easy to misjudge the shadows in the white parts. Beginners, and even some intermediate artists, think for some reason the whites won't "read" properly unless they're painted in pure, almost unadulterated white. Invariably, the bigger problem in these paintings is the darks aren't dark enough, which forces the artist to continue painting in an ever increasing spiral of lighter and lighter whites. But let's tackle the problem of painting whites correctly for now, since that's the title of this blog. Here's an example: Let's say you're painting a white (grey) horse. I'm going to use a plaster cast of a horse I have in my studio for this demonstartion. You can buy these online (or make one yourself). I found this one at a flea market! Although the anatomy isn't great, it's an invaluable reference source for me while painting. All the planes of the form (top, sides, bottom) are clearly delineated in a very broad way, making it easy to see the big forms - head, neck, chest, legs. It's perfect for this exercise.
Let's have our horse facing to the left. The light is coming from the right (i.e., somewhere behind him). His rump or backside will have a nice highlight, as will his withers (shoulder) and neck. The back of his legs will be the lightest since they are being hit by the direct sunlight, and the front of his legs will be in shadow. His face will also be in shadow. Carefully observe the pattern of the light and shadow in the plaster model. (Munnings had a particular fondness for painting this sort of lighting. His riders' faces were often in shadow because the light was coming from somewhere behind them.) Next, look for the reflected lights, especially the one underneath the horse. The reflected lights are what make the shadows luminous and not heavy. See if you can identify the reflected lights in the Munnings' self-portrait (below).
Okay, now let's reverse just the light source, and place it on the left. We'll keep our horse facing to the left. The light and shadows on the model are now completely reversed. The front plane of the horse's face is light, as well as the front of his chest and legs. The back of the horse's legs are in shadow, as are the horse's hindquarters and tail. Generally what was in shadow is now in light, and what was in light is now in shadow.
Tony Neville of Frost and Reed once told me, "You need to know how to paint a horse in sunlight, even on a rainy day." What does he mean by that? That we have to see the bright side of everything? No, he means it literally. Even when there is no light source, the artist has to know how light will affect his subject in any situation - from the left, from the right, from the back or front, from above or below. Until one learns the physical laws of light and shadow and how to apply them, he/she will continue to paint what he thinks he sees, rather than what he actually sees.
If you change the horse to a dark bay or brown horse with a white blaze and four white socks, the same rules can be applied to the white markings. The whites in shadow will be darker than the whites in sunlight. But even the whitest parts will never be pure white.

Once these lessons have been thoroughly absorbed, the painter can go further and begin mixing more sophisticated colors. For instance, the white stripe will never be just plain white. The top part may be mixed with some yellow ochre and a teeny amount of blue. Farther down his nose it may loose the yellow tint and become just blue and white, giving it a slightly cooler look. The area near his nose may become mixed with red because of the pink tinge of skin, or mixed with blue and umber to give a cooler gray color around the horse's nostrils and muzzle. There are endless possibilities.
The other problem I see with artists' work, which I referred to earlier, is the range of values in the picture, or rather the lack of a wide range of values. The study of values (light and dark) is instrumental in helping artists see the true value of any color, without the chroma (color) getting in the way. I suggest working like the Old Masters and do at least one black & white study of the subject first, to establish the pattern and relationships of the lights and darks. This can be done in pencil, charcoal or gray paint, and can be very rough or more detailed. The point is to see the painting with its overall scheme of values. Some shadows should be very dark, some lights very light and middle values are everything in between. Too many paintings look "overexposed," like photographs with the aperture wide open on the camera or something. And all the whites have little or no shadows in them! Once the artist learns not to be afraid of painting shadows, he/she will see a marked improvement in the tonal balance of the painting. This takes time and practice, but darkening shadows even a notch or two will instantly improve most paintings with this lightness problem.
I suggest doing a painting of several white objects - a still life with eggs, white flowers, potatoes, rocks, cups and saucers, etc. on a white cloth background. Have a strong side light, so that you create some nice dark shadows, and use a palette of five colors - white, ultramarine blue, cadmium red light, yellow ochre and burnt umber. Experiment with how many cools and warms you can create with these five colors. You'll be amazed at the range of colors and effects you get with these white objects and five tubes of paint!
Or paint clouds. Clouds have a full spectrum of color from warmest lights to coolest darks. Use all five colors on the palette. Clouds are pink, purple, golden yellow, white, blue, cool gray, warm brown and anything else you care to mix up. The secret is understanding their form and why they look like they do. It's the light of course! Good luck!
Posted by thefoxsbrush at 9:41 AM