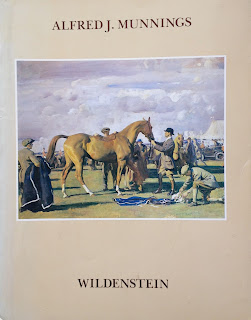 The catalogue of the "Alfred J. Munnings, Images of the Turf and Field" Retrospective at the Wildenstein Gallery on East 64th Street in New York.
It was a Loan Exhibition for the Benefit of the Jockey Club Research Foundation and ran from
April 28 - June 3, 1983. 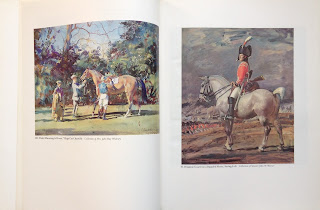 There were 124 paintings and drawings on loan from private collectors and museums. A partial list of the lenders to the exhibition reads like a Who's Who of racing's aristocracy: Mr. Paul Mellon, Mrs. John Hay Whitney, Mr. Ogden Phipps, Mr. & Mrs. Cornelius Vanderbilt Whitney, the Honorable & Mrs. John B. Hannum, E. P. Taylor and Mr. & Mrs. Walter Jeffords. 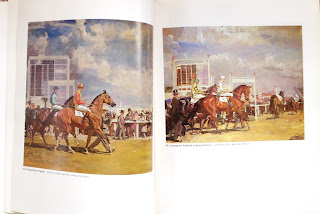 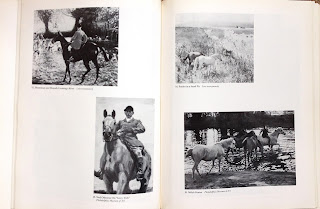 Unlike today's slick, lavishly printed tomes of auction houses like Christie's and Sotheby's, the catalogue has only a handful of color plates. The small, poor (by today's standards) resolution photos only hint at the magnificence of the paintings themselves. There are no sizes given, so one must try to remember (or imagine) their size and scope. For instance, No. 13, "Ned Osborne on 'Grey Tick' " as I recall, was quite massive, but measures a mere 3 1/2" in the catalogue.

I can still remember how I felt while standing in front of that awe-inspiring painting in the gallery; it was as if I were on the horse in front of him, giving him a backward glance before I rode off down the hill after the field! That's how powerful that image was. 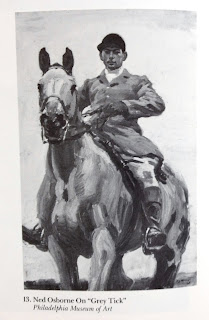 I really hope there will be another exhibition of his work in the United States, but the genre of racing and sporting art has once again fallen out of fashion. Frost & Reed, one of the most highly respected art dealers in London, stopped making their annual pilgrimage to Saratoga Springs in 2004, after 25 years of selling horse pictures there, and now focuses on contemporary art.
There was a retrospective exhibition of Munnings' paintings at the Richard Green Gallery in London in 2012. I came across an article about it by Brian Sewell, the late art critic for the London Evening Standard, while Googling the famous speech Sir Alfred gave at the 1949 Annual Royal Academy Awards dinner where he gave what can only be described as a Donald Trump-style tirade against modern art. He quickly fell out of favor and lived out the rest of his days painting at Castle House, Dedham.
Here is the link to Brian Sewell's article. http://www.standard.co.uk/goingout/exhibitions/sir-alfred-munnings-an-artists-life-richard-green-w1-8319257.html
Although Sewell was a controversial figure to say the least, I find his views on Munnings (and modern art/artists, Lucien Freud, Damien Hirsch, et al) run parallel to mine. I'm sure Munnings would have approved as well!
BTW, there's a copy of the Wildenstein's Exhibition Catalogue for sale on eBay at the moment, in case you'd like to browse the pages yourself! It's a great reference source for any artist who likes Munnings.


Posted by thefoxsbrush at 5:31 PM